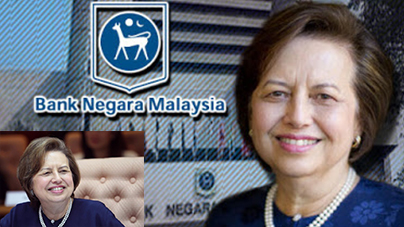 Bank Negara Malaysia, the national central bank of Malaysia is administered by its governor Tan Sri Dr Zeti Akhtar Aziz, one of the most prominent women in Malaysia. She is the seventh governor who took over the helm since May 2000 and is known to be a very strong lady being the first Malaysian woman to hold the position.

Tan Sr Zeti comes from Johor Bahru, the southern state of Malaysia to parents Royal Professor Ungku Aziz, one of the most prominent academicians in Malaysia and her mother is Sharifah Azah Mohamed Alsagoff. She studied in Assunta High School in Petaling Jaya where she then continued her Form 6 at St. John’s Institution in the capital, Kuala Lumpur. She would then finish her Bachelors in Economics at the oldest university in Malaysia, Universiti Malaya.

After that, she continued her postgraduate education at the prestigious Wharton School of the University of Pennsylvania where she completed her PhD in Monetary and International Economics before charting her career back in Malaysia. She worked at the South-East Asia Central Bank Training and Research Centre before appointed by Bank Negara Malaysia as the Deputy Manager of the Economics Department. She was then posted to London as the Chief Representative for the central bank before returning to Kuala Lumpur where she became the Chief Economist and the Head of its Economics Department. Her move up became more prominent when she became the Assistant Governor of Bank Negara in 1995, where she was in charge of economics, reserve management, foreign and money market operations and exchange control.

As the country’s top banker, she has been involved in various policy making and such where she was also named as the best central bank chief of the world by Global Finance Magazine while being involved in the special task force that examine reforms for the market system of the world by UN. During the 2010 Ma’al Hijrah celebrations, she was awarded with the “Tokoh Ma’al Hijrah 1432H”.