Public Bank is Teh Hong Piow and vice-versa 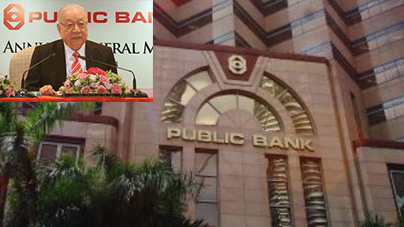 Unlike many other tycoons and billionaires of Malaysia, the third richest Malaysian Tan Sri Teh Hong Piow does not lose his focus. This prominent banker used what he knew best and trained in, worked on it for years and built his empire and wealth around it. Tan Sri Teh embarked on a very unique strategy when he build Public Bank and since then, he stayed true to his philosophy and belief for more than 40 years before becoming one of the most prominent leaders in corporate Malaysia today.

In fact, it is often said that Public Bank is Tan Sri Teh and Teh is Public Bank. In the world of takeovers and acquisitions, not many people dare claim that. They way they are synonymous are just rare because one would be able to understand Tan Sri Teh’s character and person by understanding Public Bank. If one traces back to the history of Public Bank, it will be the story of all stories.

It began with one branch and as it implies, the branch grew into more and today, it is one of the most stable banks in the world. Tan Sri Teh took with him 16 years of experience in the banking industry where he worked and become the youngest general manager of Malayan Banking and ventured on his own.

It is not every day that one would hear any one starting a bank. It is a totally rare instance and to keep it afloat after all these years with no bailouts or anything like that is just out of this world. It all began with the first outlet in Jalan Gereja back in 1966. Within 5 months, it was making money and by the end of the year, the paid up capital of Public Bank is RM12.75million, which is a whole lot back then. A year later, it went public.

Since then, it had registered profits every year throughout all the crises and global downturns. Tan Sri Teh took the calculated risks where needed and with his ambition and business acumen derived one of the most prominent banks today.