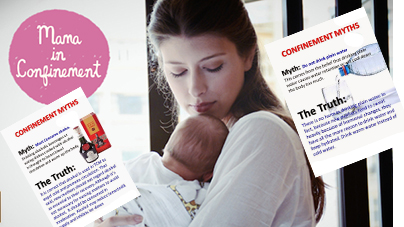 Here’s a summary on three main races confinement taboos to be practiced by mothers who just gave birth:

For Malays, you are not supposed to squat down during postpartum period as the older generation said your uterus will descend when you do so. Besides that, mothers should avoid hitting or bumping your toes because again, it will cause harm to your uterus (back in the olden days, they believe that uterus is somehow connected to your feet). Of course, you are not allowed to eat foods that are categorized as ‘cold’ and ‘windy’ such as eggplant, spinach, melon and jackfruit.

You also need to avoid drinking cold water or eating oily and fatty foods. It is crucially important for you to remain home all the time to avoid the ‘wind’ from entering your body. The ‘pantang’ list goes on and on and already it forbids you from getting out of the house, even advises you not to read or watch TV as it increases the risk of shortsightedness.

Meanwhile, some medical experts said several Chinese confinement taboos such as not washing your hair or bathing in a month as unhygienic and not drinking water for the first 20 days are illogical. Among other taboos include prohibition on carrying heavy stuffs or climbing up and down the stairs constantly, cannot be exposed to the wind (hence, you have to remain indoor most of the time). And do you know that older generations also advised mothers not to cry while under postpartum period? While your mother-in-law may prohibits you from drinking water, you are supposed to replace water with rice wine.

As illogical as the taboos seemed, mothers are encouraged to adhere the dietary recommendations to help regulate blood circulation and rejuvenate the body. Most of the foods are prepared using ginger, vinegar and dates to ‘drive’ out the toxins from your blood. Some may also prepare their food with sesame oil to promote better health and warm up the body.

Only seafood prohibited in Indian confinement

Finally, for Indian taboos, there are several similarities with the Chinese such as not to drink water on the first few days of confinement. Besides that, mothers are not allowed to eat ‘windy’ and ‘cold’ foods such as cabbage, grape and eggplant. Mothers must not eat seafood before each breastfeeding session as it may cause vomiting and rashes in the baby besides affecting your milk production.