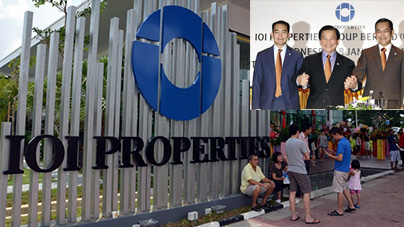 Tan Sri Lee Shin Cheng is the man responsible for IOI Corp Berhad. In fact, the company is known for having built some of the most iconic landmarks around Malaysia most notably for the construction of IOI Shopping Mall and much of the developing Puchong residential area. The fourth richest man in Malaysia has assets worth billions of ringgit with what his success coming in through the plantation sector.

As with most tycoons in Malaysia, Tan Sri Lee is known as the oil-palm king where it was what IOI was all about in the beginning. Today, it is one of the largest producers of oil palm related products and he is not resting where in 2007, IOI Corp went into 2 joint-ventures with the Indonesian plantations which will see the company reaching greater heights for sure.

Apart from that that, the company has also been venturing into hospitality businesses that include resorts and hotels while it has also been involved with retail, entertainment and shopping malls. His net worth fell badly recently with the falling of real estate and palm oil prices. IOI manages 12 oil extraction mills around the country which is able to churn out 3.9 million tonnes of crude palm oil annually with the largest share coming in through the Gomali estate in Johor.

Today, much of IOI Corp is being run by Tan Sri Lee’s sons namely Dato’ Lee Yeow Chor who has been involved with the company’s affairs since 1996 when he was appointed to the board. He is the Group Executive Director of the group which have in recent years been developing middle to high class residences around the country.

His brother, Lee Yeow Seng is helping out very much, offering his expertise in areas he is good at. The older Lee however has been embroiled in some controversy recently for having conflict of interest through some of his own companies which were involved in the property development sector.