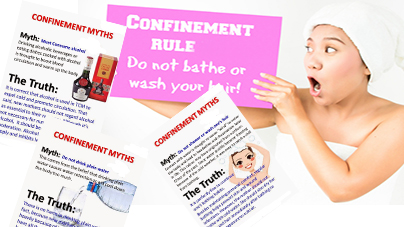 Confinement practices vary between cultures. Mothers should understand each rule of confinement to have the best resting period and restoring health. Some modern mums argue that the ‘rules’ imposed are irrational and unhygienic (not showering for about a month). So, while you are worried about how to get rid of the stretch marks, such taboos might be the least of your priorities.

Here are some of the most criticized confinement taboos in today’s society. According to older generations, you should insert daddy’s worn-out underwear into baby’s pillow because the smell of the worn-out underwear will prevent the baby from making noise in the middle of the night. In other words, it is meant to comfort the baby’s feelings. But then again, modern mums questioned the rationale behind this act as it seems unhygienic to stuff ‘smelly’ underwear to sleep with the baby.

Another common confinement taboo among the Chinese is not to praise or flatter the baby when they are around. Older generations said if you flatter the baby in front of him/her, the baby will turn the opposite characteristic of what you are saying. Say for example, if you use the words such as beautiful or cute, then the baby will become ugly in the future. Modern mums just do not see the rationale of not flattering the babies when they are around.

In addition to that, parents are not supposed to show unconditional love to the baby when he/she is sleeping soundly. That means, you are not allowed to kiss them to prevent the baby from getting nightmares.

Perhaps, one of the weirdest practices by older generations is to stick a piece of tissue paper that has saliva on the baby’s forehead. Well, older generations said it is meant to prevent the baby from getting hiccup. Most probably you have watched Hong Kong classic vampire movies where ghost busters would use amulet that has Chinese writings to stick it on the vampires’ forehead. Now, how does that sound? Do you think it is weird to stick the tissue paper on the baby’s forehead?

Some Chinese strongly believes not to kneel to a younger person and that includes your baby. So no matter what you are doing (whether you are changing the diaper with the baby on the sofa and you are kneeling, please don’t do that), older generations said you are actually causing harm to the baby. This is because the baby may fall sick when you kneel in front of them.

Here is another taboo that will make you think twice of the rationale behind the act. Babies must stay away from other pregnant ladies or else the baby will become rebellious later in life. So does that mean if your sister happens to be pregnant right after you gave birth, you are not allowed to visit her at all cost?

No entertainment during confinement

When your mother advice you stay home during confinement period, most probably you are already feeling the boredom. But here comes another twist, mothers under confinement period are prohibited from watching television. This is largely meant to avoid mothers from facing risk of shortsightedness (as if it only happens to mothers).
Finally, mothers are advised not to gulp water while they are standing. With various irrational taboos mentioned above, most probably you are not sure which to believe and which to ignore.

In most cases, a lot of confinement services are provided through word-of-mouth. This is because relatives tend to know ‘someone’ who seems to be a good confinement lady. However, you should take note of several factors before deciding:

If you are offering confinement services, advertise here or contact us today at wa.me/60126725888