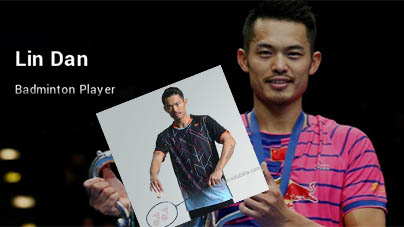 Lin Dan born October 14, 1983 of Hakka ancestry is dubbed as the greatest player of all time. Hailed from Longyan, Fujian, this professional badminton player is also known as ‘Super Dan’ among his die hard fans.

He has won many international titles throughout his career and also made it into badminton history for he is the only player to have clinched three consecutive World Championships in 2006, 2007 and 2009. In addition to that, he has also won four times in All England Open – 2004, 2006, 2007 and 2009.

Named one of the top 10 badminton players by Badminton World Federation, he has dominated the badminton scene since 2002 but losing out twice in 2006 and 2009 to Malaysian player, Lee Chong Wei.

At the tender age of 20, Lin started his career well by winning All England open in 2004 defeating Peter Gade from Denmark. Since then, Lin continued to dominate the international arena by clinching several other titles including Swiss Open and Denmark Open.

Known as a moody player, Lin sometimes throw tantrum during an on-going game to protest the line calls. When he won the gold medal in 2008 Olympic Games in Beijing, Lin threw his shoes and racket into the crowd. As a left-handed player, Lin is easily distinguishable from other badminton players with his ability to attack opponents with fast smashes and rapid movements on court.

He can easily recovers from opponents’ attacking shots thus making him a dynamic player. Super Dan creates winning shots via deceptive wrist movements to manipulate his opponents. However, critics tend to compare Lin with other players such as Indonesian Taufik Hidayat and Danish Peter Gade for Lin lack of precision when playing around the court.