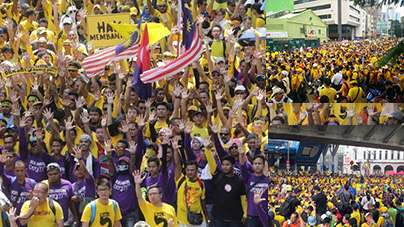 The Bersih 2.0 rally which is scheduled for July 9 took an unexpected turn after organisers confirmed that they will cancel the street demonstration and will hold their event in a stadium after holding an audience with the Yang di-Pertuan Agong recently. However, it seems that the situation is hitting a halt again after Bersih’s application to hold it in Stadium Merdeka was rejected.

Furthermore, the police claimed that Bersih is still considered as an illegal assembly as they have yet to obtain a permit to hold the rally whether or not they are going to have it in a stadium. According to the management of Stadium Merdeka, they could not accommodate Bersih’s booking which is scheduled from 2.00pm to 4.00pm.

However, the Bersih organisers insists that they still want to hold the rally in Stadium Merdeka and will not sway from their decision. Datuk S Ambiga confirmed that they have yet to obtain a permit to hold the event at the stadium but it was chosen because it was a convenient location and that they will be meeting the prime minister Datuk Seri Najib Tun Razak soon on this matter. It was also reported that the Selangor Government has offered a stadium in Shah Alam for Bersih to hold the rally.