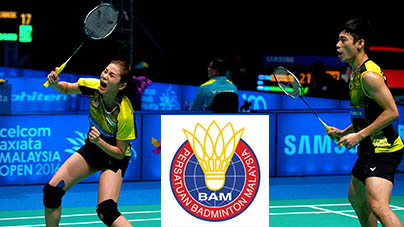 The Badminton Association of Malaysia (BAM) is associated with the Badminton World Federation (BWF) as well as Badminton Asia Confederation (BAC). Supported by Malaysia’s Ministry of Youth and Sports, BAM is an official sport’s governing body in the country.

Since the Asian countries dominate badminton scene namely Malaysia, Indonesia and China, BAM aims to reach out to all players in the country, promote the sports and also develop talented players to represent the country in international arena.

Generally, BAM has several missions to be accomplished. Of course, the priority is to have an abundant of world class players. In addition to that, realizing that women players in the country are still behind China and Korea, BAM is there to coach and lift the standards. Nonetheless, BAM also constantly train back-up players for both men and women’s team.

The last time Malaysia clinched a prestigious award was back in 1992 when the country won Thomas Cup. Therefore, BAM would ensure that the players can compete in international arena and hopefully once again regain the glory for Malaysia. To begin with, BAM would first determine and implement the appropriate course of programmes catered to players from beginner to national levels. Lastly and most importantly, BAM strives to promote and elevate badminton as ‘the sport’ to represent the country.

In fact, BAM has planned a number of strategies to attain the goals and missions allocated earlier. In an effort to promote the game as ‘the sport’ of the country, BAM would constantly encourage and control the standard of badminton.

Also, BAM would manage and handle any badminton championships and competitions jointly organized with other bodies such as BWC and BAC. Disputes regarding the competition or the game are handled by BAM. Rashid Sidek currently coaches the men singles players in the national badminton team.